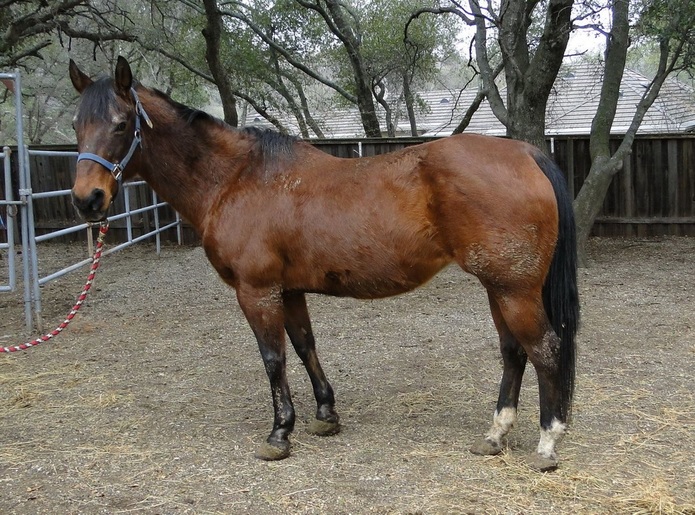 Height: 14.3 (est.)
DOB: 1989 (est.)
Sex: Mare
Color/Breed: Bay/Grade (DNA: 1st Holstein, 2nd Trakehner, 3rd Selle Francais)
Adoption Fee: Not Available for Adoption
​Category:  Resident
Kaya was part of a collaborative auction rescue effort in Fallon, NV that saved more than 30 horses from purchase by a slaughter buyer.  Kaya arrived at AAE on March 25, 2014.  She was in decent weight as far as auction/rescue horses go, but she unloaded lame after her long haul to AAE.  She was in shoes, and it was obvious they had been in place far longer than they should have.  Radiographs revealed some laminitis and thin soles, primarily in the front right, but also hind left. She was also initially believed to be pregnant, but was not.  She was said to be a younger mare by the auction rescue team, but it turns out her dental showed she’s likely a mid-20s mare.  Her teeth were in very poor condition, and she thanks Melissa Shurr, CEqDT and Dr. Stolba for their kindness in helping her back to good health.

She is an affectionately sweet mare that enjoys any human attention and grooming.  She is a volunteer favorite, and such a nice mare, she has a home with our youth programs.  Her ground manners are very nice, and she's a solid ol' riding horse (probably and old ranch horse).
Sponsor A Horse