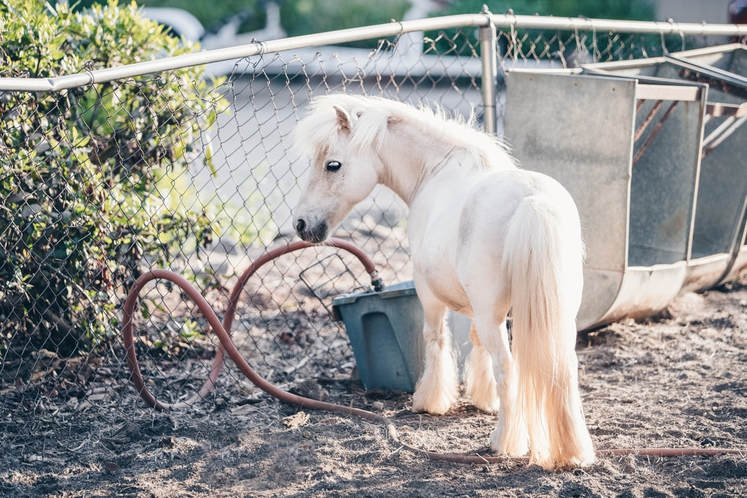 On the 31st Day, there was Marshmallow!
Marshmallow is a 20-something young man that AAE brought in, from another rescue as a companion for Patches after her two more youthful friends were adopted. Marshmallow has a light duty job in our youth programs, including Pony Pals Farm Days, Pony Parties, Field Trips, and anything else where he can shine as the center of attention.  He is an amazing little guy, and he LOVES to show off for his little friends (and the big ones, too) in the arena jumping anything he can.  Marshmallow is one of the best ambassadors of the equine persuasion you would ever want to meet.

Last year our sweet Marshmallow had an acute onset of cataracts and could barely see, but he didn't let it stop him. He still waited at the gate in the morning to come down for his special breakfast. During playtime with Patches and Daisy in the arena he walked around whinnying like he owned the place. You would have never known by his demeanor that his vision was impaired. Such a sweet soul!  However, he was no longer confident running, and jumping was not such a good thing.

While Marshmallow was accepting of his situation, YOU, our generous supporters made it possible to restore his vision in one eye.  Earlier this year, Marshmallow had his cataract surgery. It was a success! Bringing back vision to one eye not only helped his every day life, but he was able to go back to doing what he does best….putting smiles on everyone’s face. He could run, he could jump, and he enjoys playing with the kids in the arena.

Without you, Marshy would not have had this opportunity. Marshy thanks you, we all thank you!