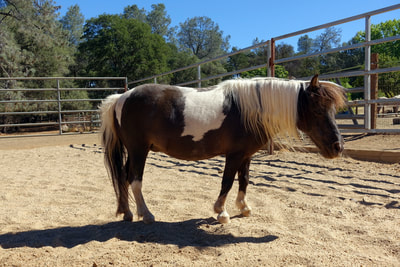 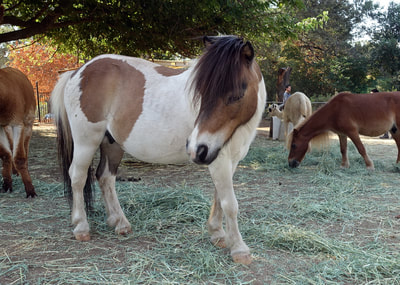 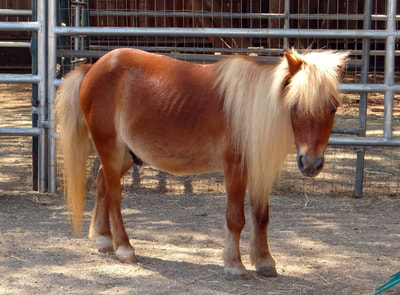 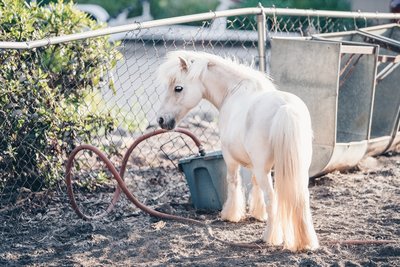 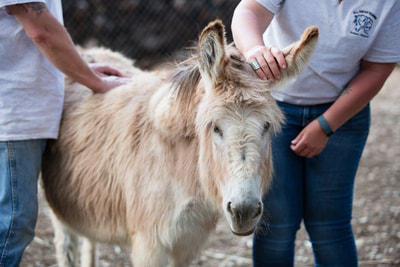 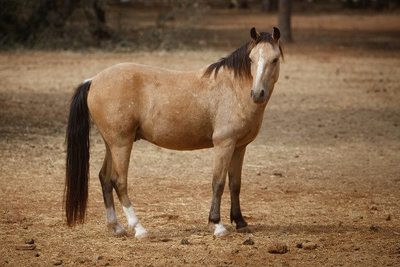 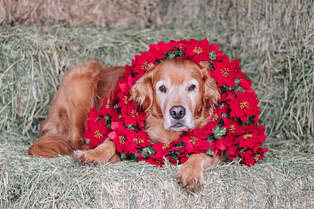 On the 2nd Day, there was the Mighty Mini Ones!
Every day throughout the year, our mini herd is here to put smiles on the faces of our volunteers and visitors.  Our little guys are some of the best ambassadors for AAE and horses alike.  Each has his or her own story of how they came to AAE.

PATCHES
Patches, the little princess, ha ha!  Patches is an older mini (20-something) that came to AAE from a dog rescue in Fall 2012.  She was on the thin side and a bit lonely.  We thought she'd be perfect for the kids around AAE.  Little did we know, kids weren't her forte.  She tolerated them at best.  Patches idea of a job is eating.  Eating hay, eating grass, eating pellets, eating anything.  Really, eating everything.  If Patches isn't eating, she isn't happy, haha.  Patches is cutest when she trots down to the barn for her morning treat.  She bounces, she smiles, excitement exudes from the tips of her hair.  The trail back to the "farm", on the other hand, is a slow, dreary trip.  Ho hum!  Really, Patches is adorable.  She's a little sass, and a little sweet.  She's the perfect Thelwell pony that needs a story written after her.

MARSHMALLOW
You met Marshmallow earlier this month, but now you can hear the rest of the story.  Marshy-man came to AAE in March 2014.  He was quite sickly.  He had been at another rescue, and they were unable to solve his problems.  He had been rescued once by this rescue, gone to a therapy home, and returned to be rescued again.  The back story isn't entirely clear, but what we know is that Marshy was a sick guy when he came to AAE.  This was not long after he arrived.

He was bony.  He lacked muscle  tone.  His eyes said it all.  Marshy was eating but wasn't holding weight and he wasn't feeling good at all.  He'd stand parked out and wait for discomfort to pass.  We tried a variety of things from diet to meds.  He would have short periods of relief, but nothing helped for any length of time.  Nothing stuck.

With the help of Dr. Stolba and Dr. Fielding throughout and an array of diagnostics one step at a time, we finally learned Marshy had an intestinal issue.  His intestinal walls were much thicker than normal, so he wasn't absorbing nutrients like a normal intestine.  Fortunately, once the issue was identified, we were able to help him with medication.  Thank goodness!!  This little guy is truly a remarkable horse.  Unlike Patches (hehe), he LOVES kids.  He LOVES activity.  He LOVES people.  He LOVES working.  He LOVES life!  He's a kind, curious, gentle old soul.  And he is old (at least 20-something, probably more), but he would say "PTHHH, no I'm not!"  Marshy has put smiles on so many faces at AAE.  We were so saddened when he developed rapid onset cataracts last year.  BUT, we were so thrilled last year when you all came to the rescue and helped Marshy regain sight in one eye.  Marshy is a gift to everyone that meets him, and our AAE community has been such a gift to him.  Marshy thanks you, we all thank you!!

DAISY
Daisy is a little (not) mini donk that came to AAE in 2016 with her gentle giants, Kasey and Angus, after a family health crisis.  Daisy ruled the roost with her massive counterparts, and it was quite evident in her waistline.  She's lost quite a bit of weight since coming to AAE, and she could still benefit from losing a bit more.  Check out that neck.  Gotta love those ears!

Daisy is one of our teachers at AAE.  All the new volunteers are privileged to meet this girl, and no doubt most would like to call her a three letter word (*ss) before the day is done.  She teaches many of the volunteers what persistence and stubborn go together.  She teaches many that not all hooved creatures are like all others.  Daisy has a subtle way of teaching many what "humble pie" is.  Truly, she is the sweetest, cutest, and most stubborn lil' critter around AAE.  That being said, treat her with kindness, and she will oblige.  We LOVE her to pieces.

ROBBIE AND FLAME
These two special boys came to AAE in 2016, not because they weren't lavished with love or not cared for.  Theirs was a downsizing effort, and we're so thankful we had the opportunity to welcome these "mature" gents to our herd.  They came at just the right time.  Marshy had lost his vision and we did not think he would be able to "entertain" kids and teach new volunteers.  Robbie is a handsome and talented guy.  He enjoys working with the kids, celebrating birthday parties, walking in parades, and being a bossy guy in the mini herd.  Really, he has a secret crush on Patches, but wants everyone to think he's just the big man on the block.  Go get 'em Robbie, you're da' man!

Flame is more the gent of the two.  He's loves attention, he loves working, he loves to entertain, and like Marshy, he loves life.  He's a happy-go-lucky little one.  He and Marshy make a great team, now only if they'd like each other!  PTHHHH!!!  These two are the perfect blend of perfect, but they're like oil and water when together.  For now, they have paddocks next door to each other and they are like grumpy old men when it comes to the "two" of them.  Maybe they'll become the "Odd Couple", bicker, bicker, bicker but hate to be apart.  'Til then, the four minis and the donk get playtime in the arena together, and some days, it's really a great show.

SPARKY
Sparky isn't a mini, but he's part of our little's crew.  Sparky was one of the first arrivals at AAE in 2009.  He came from a backyard breeder that raised ponies on a small lot in a mobile home development.  There were about 8-10 adult ponies, including a stallion, and a few youngsters.  Sparky was with his mom, and he was only a few weeks old.  They were kept in small pens and had no real turnout.  Their hooves were long, and they were sad.  Loading onto the trailer and coming to AAE was an adventure!

Sparky is another entertainer.  He's an absolute character.  Give him an inch, he'll take it a mile.  Treat him with kindness, and he'll do the same in return, usually.  He's another teacher in the bunch.  There are lots of Sparky stories here, but he tells 'em best in person.

​​If you would like to help more horses get the help they need, please donate here.