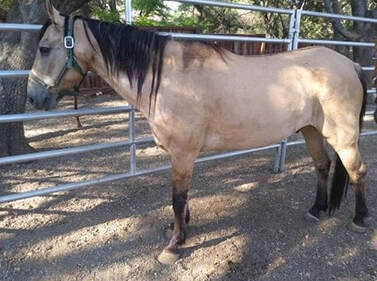 Shooter came to AAE in June 2020 from a distressed mustang sanctuary situation due to a health crisis.  After 20 years of serving mustangs, the sanctuary was unable to adequately meet the needs of the horses.  Shooter was a bit evasive and untrusting; however, with a slow approach, he was haltered and loaded easily.  He was thin and needing hoof and dental care.  Shooter also had a slow growing mass in his left cheek/throat latch area that had apparently been present since Fall 2019.  We were told he was started under saddle years ago, but never finished.

Shooter is a bit of a cranky old man.  He seems to tolerate people, and evades the halter and touching around his neck (the mass area).  He's learned he can throw his head when haltering to "escape" the halter.  Though once you are prepared, it doesn't work, and his attitude softens considerably when he realizes he can't escape.  Once haltered, Shooter seems to enjoy grooming, and he accepts fly spray when applied slowly.  His hooves are a work in progress; he has improved considerably with the fronts, but he's sketchy with the hinds.  We sedate with dorm gel for safe trimming, as he can be a bit stompy and impatient, especially the hinds.  Shooter a has a bit of opinion and wrinkles his nose, often,,,a snarly dude, but he's respectful, and relatively easy to handle.  His hoof handling and patience need some work.  All that being said, he's a quirky ol' guy that's had a rough few years, and he's kinda fun to push through the snarl and see him relax.

A field exam of the cheek/throat mass was inconclusive.  His appointment with the surgeon at LBEMC indicated the mass should be removed and biopsied, since continued growth could potentially impact his breathing and swallowing.  The mass was removed, but it tumor infiltrated his muscle and surrounding tissue, so the surgeon was unable to remove portions of the mass.  Since removal, swelling in the area remains, though it has reduced a fair amount.  Pathology on this one was a bit curious; it appears to be a type of sarcoma; however, the origin could not be determined.  The mass area will need to be monitored regularly for growth and/or change.  Unfortunately, it's in an area with multiple organs and sensitive anatomy, and further treatment is not advised.

Due to Shooter's age and health, he's not a great riding prospect; though we were told he had been ridden in the past.

Shooter is current with dental and hoof care, vaccines, and deworming, and he has a microchip.

In general, there is a lot of activity around AAE including foot traffic in and out of paddock/pasture areas, mucking with wheelbarrows, grooming and care activities, weekly farrier visits.  There are resident dogs, cats, chickens, and mini horses, as well as various wildlife including frequent turkeys and squirrels in and around paddock/pasture areas.  AAE is situated on the corner of a busy road with high speed vehicles, trucks, and sirens.  Tractors are used in and around pasture/paddock areas, trucks deliver feed, and a squeeze is occasionally used for unloading hay.  Neighbors have weekly gardeners that utilize various power tools, and children that are active in yards adjacent to some stall/paddock areas.  Horses at AAE are accustomed to a more active environment as opposed to a quiet/sterile environment.   ​
Sponsor Shooter 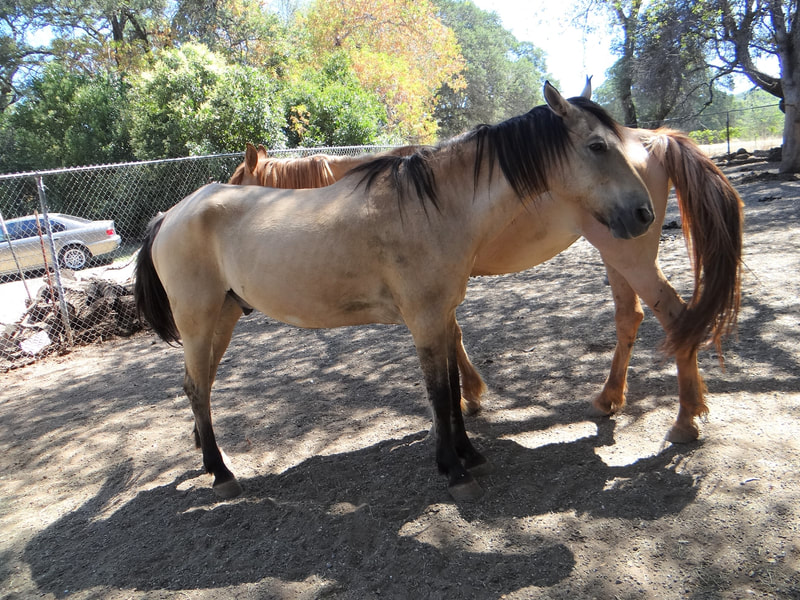 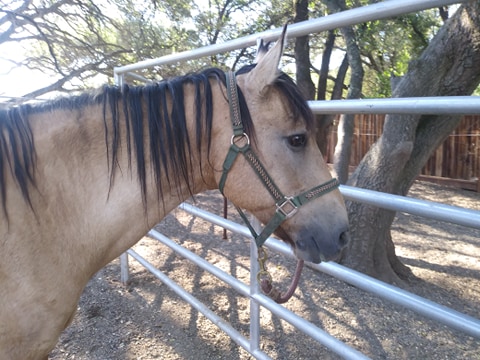 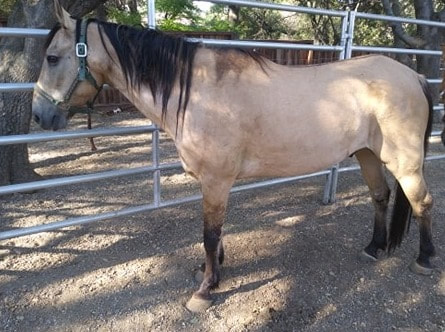 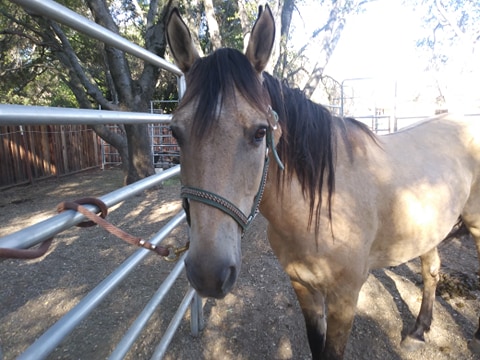 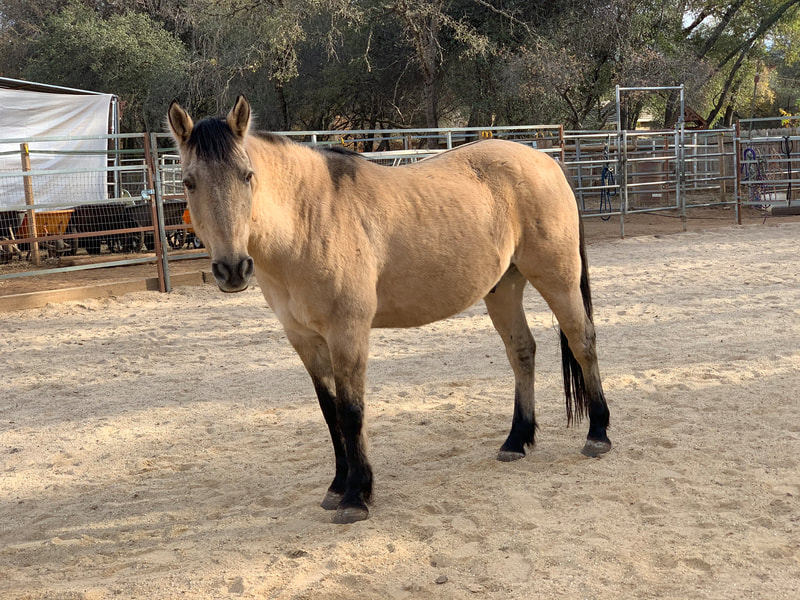 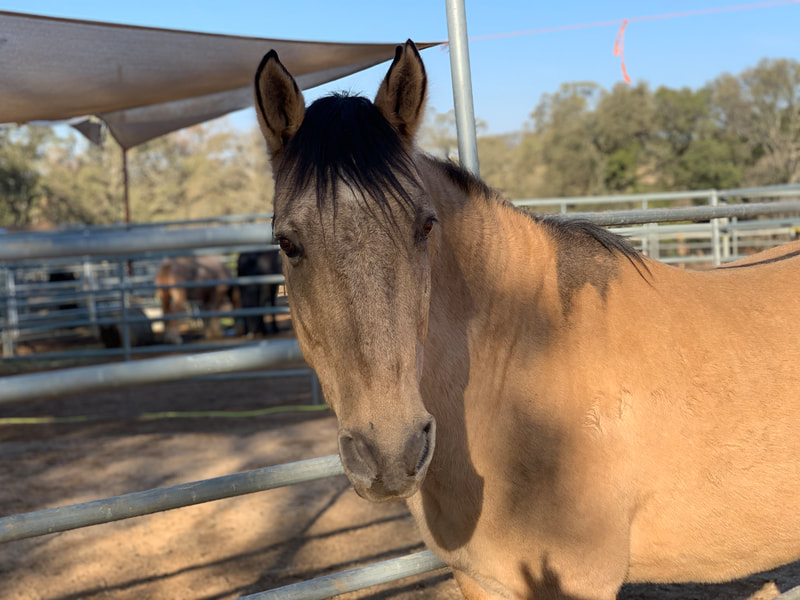 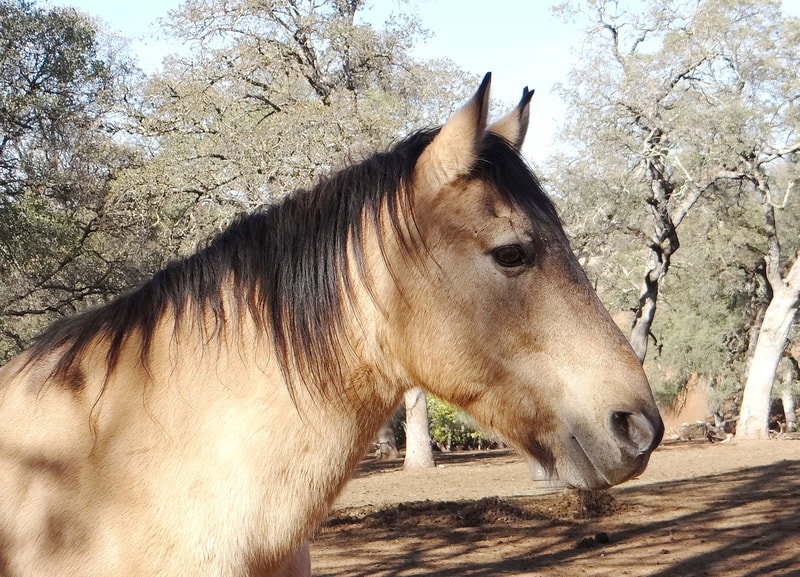